A Lawyer With A 38+ Year Proven Track Record Exclusively Practicing Only Colorado Criminal Law - Defending Your Future
Contact Us Now For a Free Consultation
Home
Articles
The Colorado Criminal Justice System – What are my Rights?
Why you Need to Actually use the Words – I Take The Fifth – Salinas v. Texas

Why you Need to Actually use the Words – I Take The Fifth – Salinas v. Texas 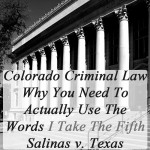 The United States Supreme Court has now made it clear while the Constitution gives us certain critically important rights we need to know how to use them. One of those rights, the right to remain silent, requires the citizen to clearly assert during an investigation but before an arrest, something like “I take the fifth” or “I refuse to answer all questions.”

In the absence of a pre-arrest clear and unambiguous assertion of the right to remain silent, the Supreme Court has ruled that a person’s passive refusal to answer questions CAN be used against that person at trial.

The Facts of Salinas v. Texas

Salinas answered certain of the officer’s questions but was silent for some important questions related to key evidence taken from the scene of the murder. Salinas never denied he knew he was free to leave at any time and that nothing prevented him from asserting his right to remain silent and to refuse to answer the officer’s question on Fifth Amendment grounds.

At the trial, the prosecutor argued that the accused’ silence was evidence of his guilt. Salinas was convicted. Salinas argued that the DA’s use of the Defendant’s silence violated the Fifth Amendment.

The Rule of Salinas v. Texas

A witnesses failure to clearly, expressly and unambiguously invoke his right against self incrimination when that person is not in custody and is being questioned prior to arrest permits the State to use that silence as evidence of guilt at trial.

“[A]ny lawyer worth his salt will tell the suspect in no uncertain terms to make no statement to police under any circumstances.

There ARE two exceptions to the rule of Salinas. Recall that the Salinas case stands for the proposition that the person being questioned must affirmatively assert their Fifth Amendment right to remain silent. The two exceptions that don’t require such an “invocation” are:

Salinas argued for a third exception that a witness can remain silent as a passive assertion of the Fifth Amendment. The Supreme Court said no… to that argument and requires an “express invocation requirement” for cases in which a witness remains silent and by doing so declines to give an answer that officers suspect would be incriminating.

Understanding Your Right to Remain Silent. A Closer Look

So here is the problem IF you cooperate and answer some of the questions police pose prior to an actual arrest if you refuse to answer other questions the Salinas case permits the prosecutor to comment on that refusal in your trial. By answering some questions and refusing to answer others and NOT expressly invoking your right to remain silent because you are not under arrest (pre-arrest investigation) your silence and your refusal to answer incriminating questions does not receive “constitutional protection.”

“It has long been settled that the Fifth Amendment privilege generally is not self-executing and that a witness who desires its protection `must claim it.’ “

After the Salinas case a Defendant’s pre-arrest silence may be commented on by prosecutors and used as evidence of guilt at trial. Any right to the Miranda warning as to the right to remain silent only “attaches” AFTER an arrest. While the Fifth Amendment protects against compulsion to be a witness against oneself, it is not “self executing” and absent an express demand to remain silent.

Here is an interview scenario you can expect.

Salinas allows the Government to impose a penalty upon an individual’s silence. There is no , “free choice” the witness is compelled because of this scenario, to be a witness against himself.

“Any time an individual is questioned by the police, that individual is compelled to do one of two things—either speak or remain silent. If both a person’s pre-arrest speech and silence may be used against that person . . . [he] has no choice that will prevent self-incrimination.”

The police can now manipulate you into incriminating yourself by your very refusal to answer your silence. By their very accusatorial and aggressive approach they can actually use their questioning technique to induce you to refuse to speak. Since THEY determine when to arrest you they time the arrest itself they control when the Miranda advisement is required to be read to you.

Salinas condones self incrimination by allowing pre-arrest silence to ” incentivize” the police to employ “questioning” or interrogation strategies to elicit a refusal to answer, rather than to elicit a truthful answer, from a suspect.

Summary And Conclusion Colorado Criminal Law Why You Need To Actually Use The Words I Take The Fifth Salinas v. Texas

The confusion that will result from the Salinas case will impact EVERYONE who believes that they are exercising, by their refusal to answer certain questions and answering others, their right to remain silent. After the Salinas case no such right exists prior to arrest, and so the witness or suspect may unwittingly provide police and prosecutors with an implied admission of guilt.

Innocent persons often decide not to may speak to law enforcement for a whole host of reasons, innocent reasons, which include the fear of police, threats from another person not to speak with police, embarrassment or any course of conduct that may not necessarily be criminal, but may be centered on the common and common sense belief that explaining his or her conduct to the police would be futile.

The Salinas case poses a major danger to unwitting and uniformed targets of police investigations. This case reduces the Fifth Amendment right against self-incrimination to a “hollow mockery” because now the passive exercise of the right remaining silent when questioned pre-arrest is now the equivalent of a confession of guilt..

Colorado Criminal Law Why You Need To Actually Use The Words I Take The Fifth Salinas v. Texas

If you found any of the information I have provided on this web page article helpful please click my Plus+1 or the Share buttons below so that others may also find it.

About The Author: H. Michael Steinberg Email The Author at hmsteinberg@hotmail.com. A Denver Colorado Criminal Defense Lawyer or call his office at 303-627-7777 during business hours or call his cell if you cannot wait and need his immediate assistance 720-220-2277. Attorney H. Michael Steinberg is passionate about criminal defense. His extensive knowledge and experience of Colorado Criminal Law gives him the edge you need to properly handle your case.

You should be careful to make a responsible choice in selecting a Colorado Criminal Defense Lawyer and we encourage you to “vet” our firm. Over the last 30 plus years by focusing ONLY on Colorado criminal law H. Michael has had the necessary time to commit to the task of constantly updating himself on nearly every area of criminal law, to include Colorado criminal law and procedure and trial and courtroom practice. H. Michael works hard to get his clients the best possible results in and out of the courtroom. He has written, and continues to write, extensively on Colorado criminal law and he hopes this article helps you in some small way Colorado Criminal Law Why You Need To Actually Use The Words I Take The Fifth Salinas v. Texas.