Understanding the Burden of Proof In Colorado Criminal Trials 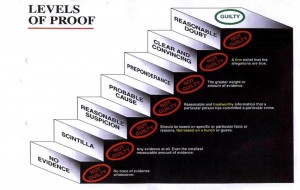 In Colorado criminal cases the burden of proof is always on the State of Colorado on the prosecutor’s office.

Colorado has the burden of proving the accused is guilty… that is the defendant is presumed to be innocenT and the defendant needs to prove nothing. That burden of proof is also as to each and every element that makes up the definition of the crime or crimes charged.

Finally that burden is quantified as “beyond a reasonable doubt.” While it is difficult to put an exact and valid numerical value on this terminology most participants in the Colorado criminal justice system believe this is “at least 98% or 99%” certainty of guilt… others say a little less.

Understanding The Burden of Proof In Colorado Criminal Trials What Does Beyond A Reasonable Doubt Really Mean?

The Colorado constitution contains this provision:

Constitution of the State of Colorado Article II. Bill of Rights § 16. Criminal prosecutions rights of defendant

In criminal prosecutions the accused shall have the right to appear and defend in person and by counsel; to demand the nature and cause of the accusation; to meet the witnesses against him face to face; to have process to compel the attendance of witnesses in his behalf, and a speedy public trial by an impartial jury of the county or district in which the offense is alleged to have been committed.

Here Is The Instruction Of Law A Colorado Gives On The Burden Of Proof 3:04 Presumption of Innocence—Burden of Proof Generally—Beyond a Reasonable Doubt

Every person charged with a crime is presumed innocent. This presumption of innocence remains with the defendant throughout the trial and should be given effect by you unless, after considering all of the evidence, you are then convinced that the defendant is guilty beyond a reasonable doubt.

The burden of proof is upon the prosecution to prove to the satisfaction of the jury beyond a reasonable doubtthe existence of all of the elements necessary to constitute the crime charged.

Reasonable doubt means a doubt based upon reason and common sense which arises from a fair and rational consideration of all of the evidence, or the lack of evidence, in the case. It is a doubt which is not a vague, speculative or imaginary doubt, but such a doubt as would cause reasonable people to hesitate to act in matters of importance to themselves.

The Burden of Proof Beyond A Reasonable Doubt can sometimes best be understood by the jury in a case when compared to other burdens of proof .. For the jury to understand beyond a reasonable doubt is, it may be helpful for them to begin with the proposition that it is the highest measure of proof required under our system of civil and criminal laws/

Reasonable suspicion is what a police officer needs to have in order to detain a person to question them about a crime.. It is needed to do a pat down on the outside of their clothing to determine if there is a valid suspicion that the person is armed with a weapon. It is more than a hunch or a guess. It requires “articulate facts”, i.e., the officer must state the facts which gave rise to his suspicion in order to make it a reasonable one.

Here is the law in Colorado that requires reasonable suspicion before stopping a suspect..

The Colorado Court of Appeals discusses the three conditions that must be met when undertaking an investigatory stop:

Reasonable Suspicion A lesser standard than probable cause. It exists when a police officer believes that a person has been, is, or is about to be engaged in criminal activity based on specific and articulable facts and inferences.

Understanding The Burden of Proof In Colorado Criminal Trials Probable Cause

Under Colorado Law probable cause is necessary for a police officer must have in order to make an arrest or search a person’s home or business. The same burden of proof is required for a judge to allow a judge the authority to issue a search warrant or an arrest warrant.

Probable cause: Reasonable cause, having more evidence for than against. A reasonable ground for belief in the existence of facts warranting the proceedings complained of.

This term was taken from the Fourth Amendment of the Constitution:

The right of the people to be secure in their persons, houses, papers, and effects, against unreasonable searches and seizures, shall not be violated, and no Warrants shall issue, but upon probable cause, supported by Oath or affirmation , and particularly describing the place to be searched, and the persons or things to be seized

Probable Cause is Necessary to Charge a Criminal Offense in Colroado

A Law Enforcement Officer must be able to articulate facts that would lead a (neutral, independent magistrate) to conclude that under totality of circumstances, there is a “fair probability” that a person committed a crime.

Probable Cause exists when a peace officer has a reasonable belief that a person has committed a crime.

Probable cause is therefore a stronger standard of evidence than a reasonable suspicion.

Probable cause involves probabilities and is decided on an objective standard intertwined with the training and experience of the specific officer who has made the arrest or search. Said another way, Probable cause asks the question: Was it objectively reasonable for the officer to do what he did based upon what he actually knew and based upon his experience?

Probable cause is viewed from the moment the arrest is made. The question is then whether the officers had probable cause to make the arrest and then at that time whether the facts and circumstances within their knowledge and of which they had reasonably trustworthy information were sufficient to warrant a prudent man in believing that the person had committed or was committing an offense.

A preponderance is the measure of the burden of proof in almost all civil courts proceedings. It has been measured as and actually called the “51% of the evidence rule”.

If a party to a civil lawsuit persuades a jury by 51% of the evidence he or she is the winner.

A “preponderance of the evidence ” has also been quantified as “the greater weight and degree of credible evidence admitted in the case.” It is that :degree of proof that, when taken as a whole, shows that a fact sought to be proved is more probable than not.”

Then there is the clear and convincing standard.

Many courts have found that “clear and convincing evidence” is between the “reasonable doubt” standard and the “preponderance” standard. If a party has the burden of proving any claim or defense by clear and convincing evidence, it means that the jury must be persuaded by the evidence that the claim or defense is highly probable. This is a higher standard of proof than proof by a preponderance of the evidence.

Understanding The Burden of Proof in Colorado Criminal Trials Conclusion

A Colorado Criminal Defense Lawyer arguing for the innocence of their client can use the massive burden of proof in Colorado criminal cases to persuade the jury the prosecutor DA has not proven the case to that extremely high burden of proof he or she can do this by graphically and literally comparing the various levels of burdens of proof required to prove certain propositions in the courts of Colorado expecially necessary for Understanding The Burden of Proof In Colorado Criminal Trials.