The general public almost always confuses the crime of Robbery with Burglary. “My house was robbed” while we were on vacation is not true. The house was burglarized when you were not there. The distinction is more than semantics it is legally significant.

In a nutshell the Colorado crime of Burglary is defined as entering in to a structure (such as a house or business) without permission and with the intent to commit a crime once inside.

Robbery, on the other hand, involves the use of fear or force to take personal property belonging to another from in that person’s presence.

Robbery is considered the more serious of the two offenses because in involves the application or threatened application of of physical force or intimidation against the victim at any time. This is a very personal and dangerous crime. It escalates the felony to a crime of violence because the violence happens during the course of the commission of the crime and culminates in the taking of property from the victim’s person or presence.

The mental state of the crime the “intent to steal”is a substantive element in the commission of the crime of robbery.

The term from the“presence of another”is defined in the law and means that the property stolen is so within the victim’s reach, inspection or observation that he or she would be able to retain control over the property but for the force, threats, or intimidation directed by the perpetrator against the victim.

The punishment for the crime of Robbery, unlike Theft, does not depend on the value of the property. The actual value of the items taken does not impact the Felony level of the charge filed against the accused “robber.”

First, it is important to note that both of these crimes are serious. Second, it is clear that while burglary and robbery are similar, they are legally distinct concepts that, depending on the facts and evidence of a case, may carry very different sentences in a Colorado courtroom.

What makes the crimes of Burglary dangerous, is that the crime involves gaining unauthorized entry into a structure, such as a home, which may be occupied by people at the time of entry, with an intent to commit a crime inside that structure. This is sometimes referred to as a“home invasion.”

However, while Burglary, although in its’ most serious form the home invasion may entail the use of violence or the threat of violence to another person, the crime usually does not involve violence and is more about a violation of property rights than a violation of the person.

The Most Familiar Example of the Colorado Crime of Burglary

When a person enters your home while you are away and steals your property you were not “robbed” you were “burglarized.” If you are home when the burglary occurred and were confronted by the burglars, you were boththe victim of Burglary AND the victim of Robbery.

Robbery does not usually involve any breaking and entering, rather it involves the taking property from another person, either directly or in their presence. There is an intent to steal that property and to steal it using force or with the threat of force.

The location is not a necessary element and it may occur inside of a person’s home (such as a home invasion) or in public such as outside a bar on the sidewalk. Before a person can be charged in Colorado with Robbery, a victim or victims must be present at the scene. One example is a bank robbery during business hours.

In Colorado Second Degree Burglary becomes First degree burglary when the accused is alleged to have increased the risk of deadly or bodily harm to an occupant or another person present at the time of the Burglary by possessing a deadly weapon such that he knowingly places or attempts to place such person in fear of serious bodily injury or intends to, and does, cause serious bodily injury to any person.

An example of how the facts and evidence will impact the sentences is as follows:

Second Degree Burglary: is a Class 4 felony punishable by up to 6 years in prison and up to $500,000 in fines. BUT the penalty increases to a Class 3 felony if the crime occurs in a dwelling or if the objective is to steal controlled substances in a building.

Third Degree Burglary: is a Class 5 felony punishable by up to 3 years in prison and up to $100,000 in fines. BUT, it can increase to a Class 4 felony if the objective of the commission of the crime is to steal controlled substances.

Extortion is another crime that can sometimes be confusing in this area.

In Colorado extortion is committed when an individual forces someone to do something against their will by threatening them with damage to:

Extortion is distinguished from robbery because the victims of extortion hand over the item or items being extorted in an attempt to avoid the threat being used against them.

The reader is admonished that Colorado criminal law, like criminal law in every state and at the Federal level, changes constantly. The article appearing above was accurate at the time it was drafted but it cannot account for changes occurring after it was uploaded. 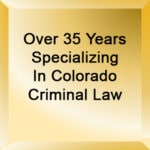 Never stop fighting never stop believing in yourself and your right to due process of law. You will not be alone in court, H. Michael will be at your side every step of the way advocating for justice and the best possible result in your case. H. Michael Steinberg is passionate about criminal defense. His extensive knowledge and experience of Colorado Criminal Law gives him the edge you need to properly handle your case.

A Denver Colorado Criminal Defense Lawyer or call his office at 303-627-7777 during business hours or call his cell if you cannot wait and need his immediate assistance please call 720-220-2277.

You should be careful to make a responsible choice in selecting a Colorado Criminal Defense Lawyer. We encourage you to “vet” our firm. Over the last 35 plus years by focusing ONLY on Colorado criminal law H. Michael has had the necessary time to commit to the task of constantly updating himself on nearly every area of criminal law, to include Colorado criminal law and procedure and trial and courtroom practice.

Putting more than 38 years of Colorado criminal defense experience to work for you.

H. Michael works hard to get his clients the best possible results in and out of the courtroom. He has written, and continues to write, extensively on Colorado criminal law and he hopes this article helps you in some small way Colorado Criminal Law The Confusion Between Robbery 18-4-301 & Burglary 18-4-203 Crimes.