Some Things to Remember if you are Stopped 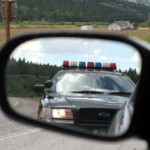 Colorado Traffic Tickets can quickly turn into more serious cases if they are not handled properly by the person being investigated … this article is intended to help advise the reader who sees the inevitable police vehicle in their rear view mirror.

1. Colorado Traffic Tickets When You See the Colorado Police Car

If a police car is following you with its siren blaring or emergency lights flashing, pull over to the right safely and quickly.

Pull over in a way that will be most likely to calm down an angry or annoyed traffic officer. Use your turn signal to indic ate any lane changes from left to right, and slow down fairly quickly, but not so quickly that the officer will have to brake to avoid hitting you. Pull over as far to the right as possible, so that when the officer comes up to your widow, he won’t have to worry about being clipped by vehicles in the right lane.

Pulling over right away is not an admission of guilt. It just means that you were very alert to everything that was happening around you. Also, by stopping as soon as you can, you’ll have a better chance of figuring out exactly where the officer says you committed a violation. You may want to return to that area later to make sure the officer was telling the truth about how he judged your speed, saw your turn, or witnesses any other violation.

2. Do not Give the Officer an Excuse to Search

A police officer is normally not allowed to search your vehicle. However, there are several exceptions to this. An officer who observes you trying to either hide something under the seat or throw something out the window may legally search your car. Once the cop is on your rear bumper with his spotlight silhouetting your every move, he’s watching for any sort of furtive movement. A sudden lowering of one or both shoulders will tip him off that you’re attempting to hide something under the seat. This gives him legal cause to search a car, and he’ll know exactly where to look. Police have had more experience watching people try to hide things than you’ve had trying to hide them.

Also, once you are stopped, a police officer may seize any illegal objects in your car that are in “plain view,” such as open beer or wine bottles, joints or roach clips. Once they see the object, they can open the car door to reach in and get it. After that, they may come across other objects that are in plain view and shouldn’t be in your car, and they can seize these too.

Your car may also be searched if any occupant in it — passenger or driver — is physically arrested. Also, if you’re arrested and your car is towed, the police may make an “inventory search” afterward, even if they have no reason to suspect there is anything illegal inside.

3. What to do Right After You’ve Stopped

After you’ve pulled over to a safe spot, you might want to show the officer a few other token courtesies. At this point, you have little to lose and perhaps something to gain.

First off, roll down your window all the way. You may also want to place your hands on the steering wheel, and, if it’s dark, turn on your interior light. This will tend to allay any fears the officer may have. (After all, police officers are killed every day in such “ordinary” traffic-stop situations, and the officer’s approach to the vehicle is the potentially most dangerous.) It may offend your dignity a little, but remember that you’re just doing a few simple things to put the officer in an optimal frame of mind.

Finally, don’t start rummaging through your back pocket for your wallet and license, or in your glove compartment for your registration, until the officer asks you for them. For all he knows, you could be reaching for a gun.

4. Should You Get Out of Your Car? No

An officer who stops you for an alleged traffic violation has the right to insist that you and your passengers get out of your car. You should do so if asked. Getting out of your car may make it easier for you to check road conditions, the weather, the place the violation supposedly occurred and, in radar-detected speeding violations, perhaps even the read-out on the officer’s radar speed detector.

On the other hand, you may wish to appear innocuous. After all, if the officer thinks that you are preparing yourself to contest the ticket, he will be sure to write copious notes on the back of his copy of the ticket, to refresh his memory if he has to testify later at a trial. It may be better to drive back a few minutes after the officer leaves to survey the area, if you are planning to contest the ticket.

Many police officers prefer that you stay in your car, and will tell you to stay there if you start to get out. If this happens, obviously you should cooperate. If you get out of the car against the officer’s orders, don’t be surprised to see a gun pointing at you. Cops are trained to expect the worst. When you get out of your car, they may assume you’re about to pull a weapon or attempt to flee. So, don’t panic, and make it apparent to the officer that you intend no harm.

If an officer has any reason to believe that you might be dangerous, he has a right to conduct a quick “pat-down” search of your outer clothing while he is standing next to you, to make sure you don’t have a concealed knife or gun. If the officer feels any weapon-sized object during the pat-down search, he can reach in and get it. Also, the officer’s good faith belief that you may be dangerous justifies a search of the passenger compartment of your car for weapons.

5. About Talking to the Officer

Many people stopped by an officer make the mistake of saying the wrong thing to him, and failing to say the right things. And a case can be won or lost depending on what you say — or don’t say — to the officer.

One of the first things traffic cops learn in the police academy is to decide, before leaving their vehicle, whether they’re going to give a ticket or just a warning. They may act as though they still haven’t made up their minds and are going to let you off only if you’ll cooperate. Don’t fall for this. The hesitating officer is often just trying to appear open-minded in order to extract admissions out of you, to use them against you in court if necessary.

The strategy is to try to get you to admit either that you committed a violation, or that you were so careless, inattentive or negligent that you don’t know whether you did or not. One way this is commonly done is for the officer to act friendly. If you learn nothing else here, learn that an officer with a ticket book in his hand is not your friend.

Don’t speak first. Especially don’t start off with a defensive or hostile “What’s the problem?” or similar words. Let the officer start talking. He will probably ask to see your license and vehicle registration. Many people make the mistake of insisting the officer tell them why he stopped them, before they’ll comply. Don’t make that mistake. Reply “okay” or “sure,” then hand over the documents.

The officer then might ask you the sort of question whose lack of a definite answer would imply guilt, like “Do you know why I stopped you?” (Suppress the impulse to reply, “Gee, no, officer, I thought you would know why you stopped me!”) Or, he might ask, “Do you know how fast you were going?” Your answers, if any, should be non-committal and brief, like a simple “No” to the first question or a very confident, “Yes, I do,” to the second. If he then tells you how fast he thinks you were going or what he thinks you did, don’t argue. Give a noncommittal answer, like “I see,” or no answer at all. Silence is not an admission of guilt and cannot be used against you in court.

Your freedom is too precious to entrust to someone with less experience.