A Lawyer With A 38+ Year Proven Track Record Exclusively Practicing Only Colorado Criminal Law - Defending Your Future
Contact Us Now For a Free Consultation
Home
Articles
The Colorado Criminal Justice System – What are my Rights?
Plea Bargaining – Am I Safe When Talking to the District Attorney?

Plea Bargaining – Am I Safe When Talking to the District Attorney? 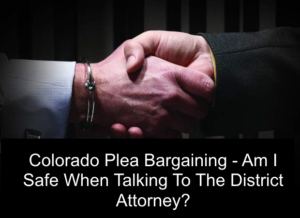 A concern many people who are charged with Colorado crimes is whether they can speak to the DA Prosecutor without hurting their case.

In a nutshell, Rule 410 provides for a kind of immunity for statements made in plea bargaining meetings with the District Attorney Prosecutor (the DA). The protections afforded by Rule 410 are actually critical to both the Government and the Defendant. Without the protection of Rule 410, plea bargaining, which is essential to the criminal justice system, could not occur.

Only a small percentage of Colorado criminal cases actually go to trial. Rule 410 gives both parties an incentive to plea bargain. It allows lawyers or Defendant’s representing themselves, the right to speak freely with prosecutors, and even admit participation in the crime. It allows for plea bargaining offering to plead guilty pursuant to a deal, without fear that the words spoken will later be used at trial if the discussions fail to yield a plea bargain or if any plea agreement that is reached falls apart.

The government benefits from the rule because it can avoid having to try too many cases.

If not for Rule 410’s protections lawyers and or pro se (self representing) Defendants could say little or nothing during plea negotiations. Specifically they could never make an admission of wrongdoing without great risk. Plea negotiations may or may not succeed, but one thing is clear, the rule protects statements made during those negotiations.

The policy behind plea agreements has been summarized by Colorado’s courts as follows:

If the effectiveness and integrity of the plea bargaining process are to be preserved, admissions or confessions made in connection with plea offers and negotiations must not be admitted as independent substantive evidence of guilt.

The Reasoning Behind Rule 410

The defendant should not be penalized for cooperating with the prosecution by engaging in an approved plea negotiation process which is consistent with the objectives of the criminal justice system.

Except as otherwise provided by statutes of the State of Colorado, evidence of a plea of guilty, later withdrawn, or a plea of nolo contendere, or of an offer to plead guilty or nolo contendere to the crime charged or any other crime, or of statements made in any connection with any of the foregoing pleas or offers, is not admissible in any civil or criminal action, case, or proceeding against the person who made the plea or offer.

This rule shall not apply to the introduction of voluntary and reliable statements made in court on the record in connection with any of the foregoing pleas or offers where offered for impeachment purposes or in a subsequent prosecution of the declarant for perjury or false statement.

Bottom Line, under Rule 410, statements made in connection with a guilty plea or an offer to plead guilty are not admissible in any civil or criminal action against the person who made the plea or offer.

Colorado Courts have also said this about Rule 410:

In ay negotiation, you want the other side to assign you some measure of credibility. The best outcomes result when you polite, respectful, and patient during the process of plea bargaining.

Colorado Plea Bargaining Am I Safe When Talking To The District Attorney?

The contents of this article are based upon my research, my personal experience and my personal analysis and opinions developed from my thirty six years (as of 2017) of criminal trial experience from both sides of the courtroom as a former career prosecutor for Arapahoe and Douglas Counties (14 years) and as the owner of my own Criminal Defense Law Firm since 1999 (19 years).

The reader is also admonished that Colorado criminal law, like criminal law in every state and at the Federal level, changes constantly. The article appearing above was accurate at the time it was drafted but it cannot account for changes occurring after it was uploaded.

Never stop fighting never stop believing in yourself and your right to due process of law. You will not be alone in court, H. Michael will be at your side every step of the way advocating for justice and the best possible result in your case. H. Michael Steinberg is passionate about criminal defense. His extensive knowledge and experience of Colorado Criminal Law gives him the edge you need to properly handle your case

About The Author: H. Michael Steinberg Email The Author at: hmsteinberg@hotmail.com. A Denver Colorado Criminal Defense Lawyer or call his office at 303-627-7777 during business hours or call his cell if you cannot wait and need his immediate assistance please call 720-220-2277.

You should be careful to make a responsible choice in selecting a Colorado Criminal Defense Lawyer. We encourage you to “vet” our firm. Over the last 36 plus years by focusing ONLY on Colorado criminal law H. Michael has had the necessary time to commit to the task of constantly updating himself on nearly every area of criminal law, to include Colorado criminal law and procedure and trial and courtroom practice.

Putting more than 38 years of Colorado criminal defense experience to work for you.

H. Michael works hard to get his clients the best possible results in and out of the courtroom. He has written, and continues to write, extensively on Colorado criminal law and he hopes this article helps you in some small way.