A Lawyer With A 38+ Year Proven Track Record Exclusively Practicing Only Colorado Criminal Law - Defending Your Future
Contact Us Now For a Free Consultation
Home
Articles
The Colorado Criminal Justice System – What are my Rights?
Can They Search My Car? – The Colorado Protective Sweep

Can They Search My Car? – The Colorado Protective Sweep 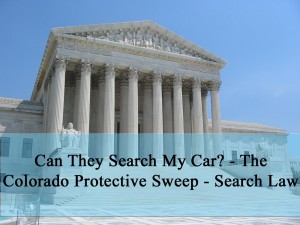 Colorado police are allowed to search your car without your consent under certain circumstances. This article focuses on a search of your car called a protective sweep which is represented in Court as necessary (under certain conditions) for the safety of the police officers involved even in the most routine of traffic stops.

While I have written on the use of the protective sweep in home searches such as in Colorado domestic violence investigations this article looks at protective sweeps in the context of automobile searches.

In the recent case of People V Delacruz (2016) the Colorado Supreme Court analyzed when and how a search of a person’s vehicle called a protective sweep is justifiable under Colorado law.

The Colorado Supreme Court held that a gun discovered during a valid protective search of the vehicle was admissible at trial against the Defendant Delacruz (a passenger in a vehicle stopped for a routine traffic violation). The Court reversed the suppression of the gun and remanded the case for trial.

The Fourth Amendment to the United States Constitution and the Colorado Constitution -contain “parallel provisions” that protect all of us against unreasonable searches and seizures. U.S. Const. amend. IV; Colo. Const. art. II, § 7.

The six exceptions to the Warrant Clause of the Fourth Amendment are “well delineated:”

One of those EXCEPTIONS, that falls into the category of vehicle and container searches, occurs when a Colorado police officer conducts a brief investigatory stop of a motorist. The law allows that police officer to make the stop ONLY if he or she has “reasonable suspicion” that the driver has committed a traffic violation.

IF, during that “investigatory roadside stop,” the police officer develops “ an articulable and objectively reasonable belief that a vehicle occupant may be armed and dangerous ,” the officer may then conduct a protective sweep search of the vehicle’s passenger compartment and the occupants of the vehicle for weapons.

How Much Of A Search Is Permitted During A Protective Sweep?

Under Terry the “scope and character of such a search must be reasonably related to the purpose of ensuring officer safety…” no more and no less.” Therefore every challenge to the scope of a protective sweep search of a vehicle’s passenger compartment is limited to those areas in which a weapon may be placed or concealed.

The police officers who conduct the protective sweep are ONLY permitted to make an initial cursory examination of objects discovered to determine if they are weapons or if weapons have been secreted inside the objects again nothing more.

“Control” Over The Persons Present During The Protective Sweep

Colorado criminal law also allows during the execution of a “protective sweep” for the police to physically restrain the vehicle’s occupants, even allowing the use of handcuffs.

One could reason that the occupants of a car now physically controlled by handcuffs are no longer a threat to the police. Not necessarily so under the law. Colorado criminal law allows a police officer who already has physical control of a suspect and any other occupants of a car to complete the protective sweep of the car.

The reasoning here is that if a suspect is not ultimately arrested, that suspect even if they are handcuffed may somehow still access weapons when they are permitted to return to their car at a later time. There is some logic to that position.

There is no more dangerous a time for a police officer than during roadside encounters with the drivers and passengers of automobiles especially when those occur at night. Since a suspect could still “break away” from police control and retrieve a weapon”- the officers are permitted to restrain them during the protective sweep.

Compare the “search incident to arrest” scenario below. In a protective sweep Terry Type context:

The purpose of such a limited protective search is not to discover evidence of crime, but to allow an officer to pursue an investigation without fear of violence.

What Then is an Articulable and Objectively Reasonable Belief That a Vehicle May Contain a Weapon?

In the Delacruz case as in all cases challenging a warrantless search, the inquiry is FACT BASED and in this case the Colorado Supreme Court closely examined those facts.

The Court found the following facts to support the officer’s decision:

Based on this information the Colorado Supreme Court found an articulable and objectively reasonable belief that the vehicle may contain a weapon and therefore the officer did not exceed the lawful scope of a protective search (by looking behind the driver’s seat because the rear floorboard is an area of sufficient size to conceal a weapon and would have been within the reaching distance of a vehicle occupant.)

The Reason for the Exclusionary Rule

Colorado criminal defense lawyers as they zealously defend their clients will seek to exclude damaging evidence if it can be argued that the evidence in question was even possibly obtained illegally in violation of their clients’ constitutional rights.

Using the tool of a Motion to Suppress Evidence, the lawyer’s duty is to seek the suppression of the illegally obtained evidence under the “exclusionary rule.”

The exclusionary rule is simple to explain but hard to successfully utilize. The rule provides that illegally obtained evidence will be excluded from use in a criminal trial. Whenever Colorado police officers obtain evidence in a manner that violates a person’s constitutional rights those rights, if they are to be enforced, are enforced through the application of the exclusionary rule by the Trial Judge.

The exclusionary rule is used to make certain that if there is a serious enough violation of the Fourth Amendment’s guarantee to be free from unreasonable searches and seizures, the Sixth Amendment’s right to counsel and the Fifth Amendment’s privilege against self- incrimination, then ALL of these rights can result vis a vis the Fifth and Fourteenth Amendments in the suppression of illegally seized evidence and the prohibition of the use of that evidence at trial against the accused.

The reasons for the exclusion of illegally seized evidence are based, not on principles of trustworthiness or reliability as in other forms of evidence that is held inadmissible, but on the rationales arising from the deterrence of police officers from disregarding the Constitution in future cases and in the need for judicial integrity of our criminal justice system.

A search of a vehicle incident to an arrest is valid if the officer has a reasonable belief that evidence of the crime, after an arrest, might be found during the search. Under Colorado law, a vehicle search “incident to arrest” is tied to the nature of the crime upon which the arrest was made. The nature of the arrest then often determines the scope, breadth and validity of the subsequent search.

A Protective Sweep of a vehicle, in contrast, during a roadside investigatory stop involves:

“the possibility of access to weapons in the vehicle… since the driver or passenger will be allowed to return to the vehicle when the interrogation is completed.”

Unlike a search incident to arrest which obviously involves an arrest, the purpose of a protective sweep (search) is intended to neutralize possible threats to officer safety. The nature of this threat is present notwithstanding the initial reason for the investigatory stop. That is .. the nature of the crime leading to the investigatory stop is not determinative of the reasons for the protective sweep.

Can They Search my Car? The Colorado Protective Sweep Search Law

The reader is admonished that Colorado criminal law, like criminal law in every state and at the Federal level, changes constantly. The article appearing above was accurate at the time it was drafted but it cannot account for changes occurring after it was uploaded.

Never stop fighting never stop believing in yourself and your right to due process of law. You will not be alone in court, H. Michael will be at your side every step of the way advocating for justice and the best possible result in your case.

About The Author: H. Michael Steinberg Email The Author at hmsteinberg@hotmail.com A Denver Colorado Criminal Defense Lawyer or call his office at 303-627-7777 during business hours or call his cell if you cannot wait and need his immediate assistance 720-220-2277. Attorney H. Michael Steinberg is passionate about criminal defense. His extensive knowledge and experience of Colorado Criminal Law gives him the edge you need to properly handle your case.